My first experience in the Hospice in 2008 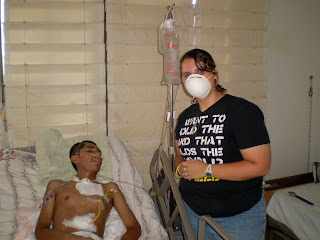 I wrote this paper for my English class in my first year of Bible College about my first experience in seeing the Hospice in 2008. I thought I would share how the Lord changed me in just a couple of moments.
**The picture here is of my first patient that passed away when I started helping more in 2009- he was a young man my own age. Was found in the street beaten almost to death and we didn't even know his real name.

Death and Despair vs. Hope and Peace

My forest green t-shirt and blue jeans swayed with the steps of my weak, sick, emotionally drained, and sleep-deprived body following my heart.  Shaky from a long week of building I knew I had to keep moving. My lime green and white tennis shoes, covered in Mexican dirt and sawdust, stepped down into a room that I was hesitant to see.
Cement floors covered in dirt, wooden ceilings falling in, beds lining up so tightly that walking was a challenge. The stench of sewer, dust, garbage, and sickness filled my nostrils. The taste of dirt surrounded my mouth and grime coated my skin. The sound of people chatting away and cars driving by bounced off the run-down white paneling.
My eyes glanced over to my right as I saw a Hispanic man lying in a poorly padded hospital bed. IVs hanging from coat hangers stretched over to his arms.  His body was motionless as each breath was a gasp. He was disconnected from the things around him. He seemed to be in a coma of some sort. The owner told me he needed surgery to be able to make it.
Next to him laid a man whose eyes have stayed vividly in my mind since the first moment I saw him. As I gazed into his bleak eyes I saw a look of terror and concern. It seemed like he felt he needed to hide everything but his head from us. His dirty brown hands clinched tightly to an old blue blanket as he held it up to his chin. He peered at me with wonder and hope. His black and gray hair was short and almost clean cut. His skin seemed frail and thin. I heard that he couldn’t walk, but I felt as I looked at him as if I was further adrift than he was. 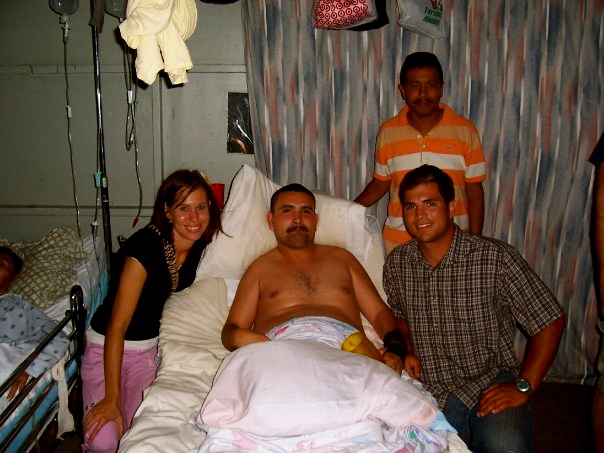 To my left sat a shirtless young man. His smile brought warmness to my heart and he touched my hand gently as I passed by. His fingers were folded in, paralyzed from a drug deal that had gone awry six years before. After being stabbed in the neck 14 times with an ice pick, his life was spared but his suffering from one night was still prevalent in his life today. His hair and mustache were a caramel brown and he was covered from the waist down with white sheets. Appearing in his dark eyes I saw a chance of hope and happiness. I asked him if I could sing for him and the other bed-ridden patients. He looked at me and nodded with a great big smile.
I stood at the foot of his bed, focusing on the five patients in the room with only two in an apparent state of awareness. A friend, Andy, stood beside me: a tall boy with curly brownish-blonde hair and a light wooden colored acoustic guitar hanging from his shoulders. I looked at him for the start of the song. I gazed over around the room, seeing another man in a coma and a lady that had a stroke not too long before we came.
The man lay stiff in a white hospital robe with blue triangles spread out all around the fabric. His mouth was wide open, a breathing tube stretched from his nose to a tank helping him survive. His legs were long, brown, and dirty hanging out of white blankets. IVs hung from a tall metal stand next to his small-gated bed.  I wondered what his story could be. I longed to hear about who he had been before this ailment had set in.
The lady’s head cocked to the side snuggled into a pillow. She laid covered in white blankets from her neck down. Her gray and black, curly, shoulder-length hair covered most of her face. I assumed that she was either asleep or in a coma from the stroke. Her body faced mostly to the side, cradled in her hospital bed. She was the only woman that the facility was holding at the time.
The owner, a short middle-aged man, took people in after the hospital in Tijuana rejected them. The hospital would throw patients on the curb to die for not being able to pay or not having family. He had a smile and persona that made me feel comfortable the moment I met him. The power and love of Christ seem to shine through him. He leaned in the doorway awaiting our song with his bright orange shirt glowing through the dimly-lit room.
I stared in disbelief as the guitar chords reverberated through the room. I came in for my cue and the words flowed from my mouth. Each word became harder and harder to verbalize as I thought about them.

More thoughts tore through my mind. What does it mean to be desperate for God? What does it mean to be lost without Him? Tears welled up in my eyes as I looked at those abandoned people. With no family, no friends, no home, no money, and even the hospital didn’t want them. Who am I? I’m not faithful! I don’t have faith!
The man gripping his tattered blanket staring at me as I sing, waiting for a 4,000-dollar operation, so he can walk again, has faith. I have nothing close. I don’t know this God of the Bible. I have no idea what it means to suffer. I have a home. I don’t live in a place full of 35 terminal patients living their lives out in peace. This place is smaller than my house. Who am I? Why do I say the name of Jesus but don’t see Him for who He truly is?
Tears flowed down my face. The words filled my heart and I felt like a ton of bricks weighed on my chest. I looked at these people, longing for their faith. I closed my eyes to keep some of my emotions down so I could at least finish the song. The atmosphere was sweet and almost peaceful.  I felt helpless and like a hypocrite to say I am a Christian along with these people. The words became more and more clear as the song finished.
I sang the last note and waited for the guitar to finish. My eyes were almost glued shut in tears. I opened them to see, through blurry vision, the man in front of me smiling and clapping. He was thanking me over and over for coming in and singing.
I went over to the man whose eyes still burn into my soul. I held my hand out to hold his. He looked surprised, but he quickly let go of the blanket and reached out. His warm, dark, dirty hand met mine and I was changed. With a shaky voice and tears blocking my view I said, “Cristo te ama,” which means ‘Christ loves you’ in Spanish.  With a smile, he squeezed my grimy, tired hand and said with confidence, “Cristo te ama.” His eyes looked straight into mine; they became relaxed and at ease.
I said my goodbyes and hugged some of the men. I walked out thinking I never wanted to leave.  I took each step carefully while leaving the hospice center and smiled at the man who held open the metal gate for my team and me. I wiped the tears off my sun-burned cheeks and headed over to our van. I looked back wondering ‘Why am I so blessed? All I did was visit with them and sing them a couple of songs. How is that a big deal?’ I wanted to do more. I wanted to be something more. These 34 men and one woman captured my heart in a matter of hours. I will never be the same.
Stepping up into the van I found my seat and planted myself next to one of the kids in my group. My tear-stained face hurt and I became completely drained. I peered out the back van window to the hospice center.  It stood as just two little buildings, made of ply- wood, with a blue tarp in between for cover, some old boards tacked onto the roof, and a tall metal gate protecting the individuals within. The atmosphere brought a sense of hope and belonging to my heart. Instead of being a place of death and despair, it seemed to be a place of hope and peace. Jesus is walking in Tijuana and He showed me what it means to truly have faith through those people and I never want to go back to who I was before. 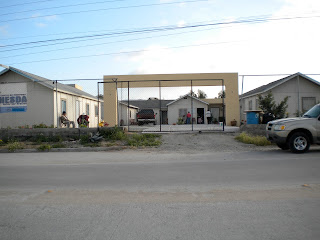 The Hospice now has a new home! In January of this last year 2012 they moved into their new facility that Baja Vision Ministries built with many groups! Truly a blessing beyond words.
Posted by Tenielle Lytle at 1:15 PM 1 comment:

Hello everyone!
Here is an easy way to donate to what I am doing. Go to www.cwomissions.org and at the bottom of the screen it says "Donate Now" click on that and under "How you can help" scroll down to find Independent Missionary and select my name "Tenielle Lytle."
The money that you give will go directly to the missions I work along side and so that I am able to do what I do. :) And everything is tax-deductible. Thank you so much, without you all I would not be able to do what I love.
keep in the SON in your eyes,
Tenielle